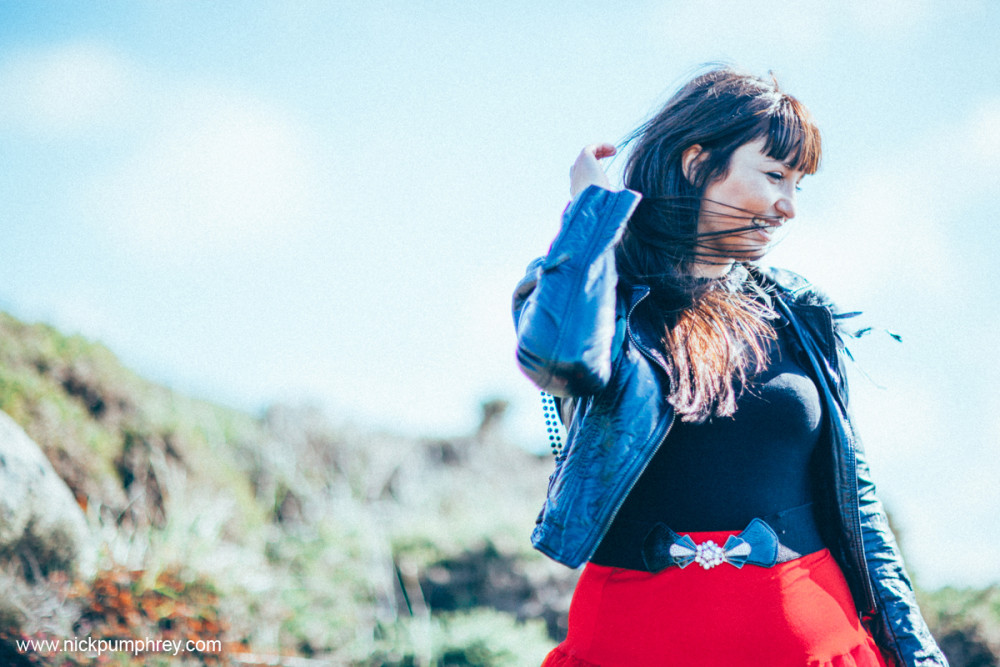 By Festival NewsFebruary 18, 2017No Comments

Rosie Crow’s sound has been described as somewhere between Siouxsie & The Banshees and Cyndi Lauper having a sing-off with Kate Bush.” (Q Magazine).

Rosie lives in Porthleven (she’s excited about rocking onto a stage that’s virtually in her own back yard) so we met up with her — and her adorable 8-month old son Tiga — in Nauti But Ice to chat about her music, motherhood and the pull of Cornwall.

How would you describe your music?

It’s hard to describe. It’s in the genre of pop music but with an alternative, quirky slant. One reviewer said we had just the right amount of weirdness and I like that – it’s pretty accurate.

Why should people come and check you out at the Festival?

Because the band members – Layla Astley on drums, Todd Barden on guitar and Crampie Collins on bass are just great musicians. We’re really dynamic when we play live and no two shows are the same. I’m feeling really inspired about the Porthleven gig and I think it’ll have heaps of energy.

Have you performed at Porthleven Food Festival before?

I performed with Rosie and the Goldbug in 2015, which was cool, but I’ve not performed as a solo artist with this band before.

How has your music changed since you went solo?

I don’t like saying it because it means I’m getting old but my music is more mature now. With Rosie & The Goldbug it was all about the vibe, the energy and not necessarily the quality of the music. Now I want to portray more about the experience of life and connect emotionally. See – old!

You crowdfunded your solo album. How did that work out and why did you do it that way?

I didn’t know a lot about Crowdfunding and I didn’t have a label at the time. I wasn’t sure at first as it felt like taking money off people. But then I realised it’s really just like a pre-order and people are getting something for their money. I think the experience was great and recording the album was a dream because I felt really supported. That confidence going in was a really nice feeling.

You’ve recently become a Mum – how’s that going and has it changed the way you think and write?

I love it. I love taking Tiga to gigs. He has these little ear defenders and I was worried about it at first but he loves the hustle and bustle. I did think about not doing music for a few years but it’s who I am and it’s what I want for him – to be a band baby and say he grew up in that scene. I have to be a lot more efficient now though – I don’t have the luxury of writing or getting things done when I want I have to do it when he’s nursery or snuggled up in bed.

Are you a confirmed Cornwall girl? Do you ever think about moving?

I grew up in a remote part of Bodmin so Porthleven feels like the city to me! I studied in London and lived in New York for a while and I still travel with my music so because I have that I think Cornwall is an amazing place to come back to – it’s like a magnet. Cornwall is a place that counts too – I want to live somewhere where things are happening and you can be in the middle of it and we have great things happening here – the Eden Sessions, fantastic theatre companies, as well as the inspiration. It’s so inspiring here when it’s stormy especially; I love that better than a sunny day because it’s so raw.

What are you looking forward to the most about performing at the Festival?

Playing to a friendly crowd! I’ve got really good friends in Porthleven and I’m looking forward to seeing some of them in the crowd! Porthleveners have a great rep for having a good party so it’s going to be amazing. All my artwork is done by a chap called Joe Skinner who lives in the village and there’s just a great network. The day we’re on stage is also Record Store Day (April 22nd) and we’re releasing our first vinyl single for that so it promises to be a great day all round!

Rosie and her band will be performing on the Ship Yard stage on Friday evening.

They’ll also be on the Lime Kiln Stage at 3pm on Saturday.