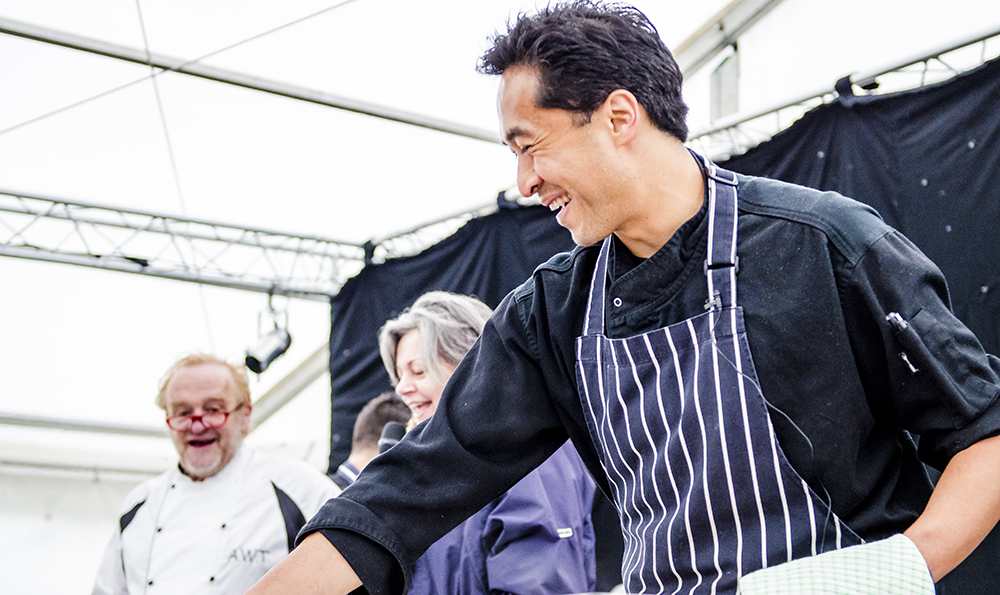 Chef’s Theatre the best yet!

By Festival NewsJanuary 28, 2017No Comments

From the very best Michelin-starred chefs to international food celebrities, the crème de la crème of the foodie world will be cooking live at this year’s Festival.

Food-loving festival goers can enjoy a whole day’s programme of top gastronomic talent in the lively Chef’s Theatre. In the most impressive line-up seen at the festival in its nine years, celebrity chef Antony Worrel Thompson continues his patronage of the Festival and will be joined on stage by Great British Menu contender and local Porthleven restaurateur, Jude Kereama. Jude will be familiar to BBC2 viewers from his recent appearances on the Great British Menu. His restaurant Kota received the Trencherman’s Guide 2017 Award for Creativity and Innovation.

Crowds will also be treated to Michelin-starred chefs Josh Eggleston from the Pony & Trap in Bristol, and Simon Hulstone of The Elephant in Torquay. Both recently appeared with Jude in the BBC2 chef’s competition. Josh is the youngest chef in the UK to receive a Michelin star and is tipped for a star-studded career. Simon is an award-winning chef with a talent for using local, seasonal produce to create memorable flavours. Since the age of 16, he’s been competing at and winning competitions around the world. Simon has represented his country on more than 20 occasions, twice in the world’s most prestigious culinary contest, the Bocuse d’Or.

Jack Stein and his chef Simon Allot who is head chef and Rick Stein’s Porthleven restaurant will also appear, along with some of Cornwall’s best-loved talent, international experienced chefs Guy Owen, (Idle Rocks, St Mawes), Nik Boyle (The Victoria, Perranuthnoe) and Ben Prior (Ben’s Kitchen, Marazion). Ben’s Kitchen was voted Best Restaurant at this year’s Trencherman’s Awards and regional winner of Restaurant of the Year in the Waitrose Good Food Guide.

Food Festival Chair David Turnbull said: “The Chef’s Theatre is one of the main attractions of the weekend so we’re delighted that once again the Saturday line-up on offer showcases some of the finest chef talent from Cornwall and beyond. This year we’ll also have a programme of chefs demonstrations alongside our Sunday Bake-Off competition and the popular Local Chefs cooking stage on Festival Saturday hosted by Amelies.”

The Chef’s Theatre is hosted by BBC Radio Cornwall presenters and starts at 10am on Saturday. Audience members can often take part in the demos by asking questions and sampling the cooking.

Check our list of high quality food producers that range from cheese to coffee to gin located in the bustling main marquee looking out onto the harbour. Around the harbourside visitor’s will also find the best street food Cornwall and the UK has to offer. In a new addition to the festival, the Farmers’ Market will bring the freshest produce to town for visitors to purchase and fill their fridges.

The Festival also scores with a unique atmosphere created by live music, bars around the harbour and entertainment all day long. With the exception of night-time entertainment, the Festival is free to attend.